In which the video game Persona 3 and its ending are discussed. Fair warning.

A playscape, a word I discovered during a brief dip into Wikipedia, the shallow end of the internet, is an architectural term which refers to playgrounds designed to resemble natural environments. I’m not going to talk about playground design theory. Even so, the playscape is a salient idea for my argument. To avert the dangerous possibility that anyone will ever have any interest in single/hand/clap, I should preface this entry now: I am going to talk about the Japanese role-playing franchise Persona, specifically the third installment, and the satisfying degree of ludonarrative harmony it displays. If you didn’t get the first part of that statement, maybe go do something else; I hear Breaking Bad is pretty good. If you were with me until the last part, try skimming this excellent critique of BioShock by Clint Hocking. I’ll be here.

No, wait, come back! Video games!

Ludonarrative harmony is the opposite. A game with ludonarrative harmony promotes its narrative with its interactivity. As a frustrated Hocking suggested, this is ideally how a cohesive, narrative game should be–unless, I guess, you’re a designer trying to be all ironic and make a point about the state of the industry or whatever, in which case just play The Stanley Parable and be happy that someone already got to it and made it funny to boot.

Unlike Hocking, I’m not breaking any new ground here. What I want to do is shed some light on a progressive development in modern game design. In the current games criticism atmosphere, where consensus is rare and optimism is rarer, derision is à la mode and pretty easy game. Kudos are largely dismissed by the overwhelming current of internet cynicism; if the game is Japanese, any praise is apparently “subtle racism.”

Now, I’m not trying to condescend, but I would assert that Persona 3 exhibits potent ludonarrative harmony. The result is a frequently draining, equally rewarding experience of mimesis, or art imitating life. It’s a playscape. Catch me on another day and I might let loose on a tirade concerning some of Persona’s archaic, frustrating design liberties: excessive dungeon recycling, the insistence on “save points” (why do we need those again?), the fact that time and time again, hobbled bosses will instantly trump the player’s party with a ludicrously destructive attack he was never fairly conditioned to expect. There are multiple facets of Persona that seem handmade to disrespect the player and require a masochistic threshold of pre-established tolerance for JRPG tropes. Amazingly, even the objectively bad parts of Persona seem to support its ultimately satisfying, “ludonarratively harmonious” (only time I’ll say that; sorry again) arc. Persona is about those choices and your own. Persona is about making the most of what you have while you can. Persona is about how you choose to invest your life into others; it’s about studying for a final that’s never handed back.

To be clear, the Persona games are not about player freedom. That bit is crucial: Persona 3 can be boiled down to a series of accumulating decisions made under very specific constraints and one concluding consequence. At this point in the discussion, I’d hope you’ve either finished Persona 3 or couldn’t rent Breaking Bad: the narrative of Persona 3 is a steady chug toward certain death. As a refreshing distinction from games such as BioShock, however, Persona 3 never attempts to don the weighty clothes of unrestricted choice. It is a meticulously themed, thoughtfully paced presentation. It’s hardly ambitious but deftly executed. Persona 3’s denouement reflects your decisions in the appreciative faces of those with whom you chose to spend your time. 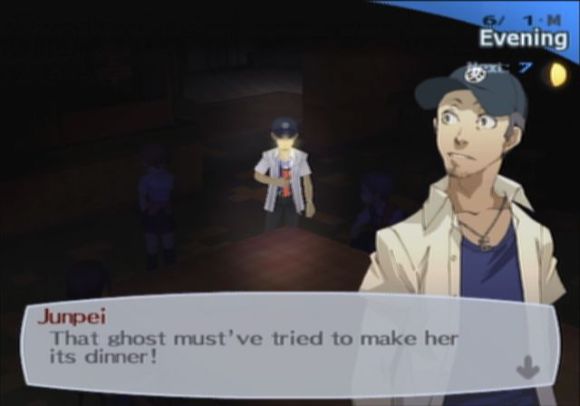 Maybe not with this idiot.

There is that: the franchise’s signature mechanic, the Social Link, lends weight to your choices. As you follow the rigid schedule of a dedicated high school student (or take enough in-class naps to qualify for a diagnosis of mild narcolepsy), social and beneficent (your general save-the-world, slay-a-few-psychosexual-demons business) duties yank at your sleeves from every direction. With only so much free time in a period spanning less than three school semesters, your attention within and beyond the gates of Gekkoukan High is highly sought after. Go ahead; blow off the art club nerd’s invitations to hang out next Sunday in favor of spending all day grinding levels in the game world’s sadly unplayable, fictional MMO Innocent Sin. He’ll shrug off your refusals for a while, but eventually your turbulent friendship will dissipate and leave an ultimatum: either begin the process of reparation or cut ties for good. There is a strict economy at play in Persona; you won’t have time for everyone. Maximizing that time is essential. Life is short; yours is shorter.

The arcs of those you do meet, such as one girl who must face her inferiority complex by coaching a grade school sports team, can be  less inspired than others, such as a whiskey-swilling, brusque monk who sees in your own the face of his long-absent son. When they land, however, they land firmly like dropkicks to the gut. The localization writers at Atlus should be commended for exceptional work: emotional crescendos that might sound flat or cloying if composed by a lesser pen increase the player’s fondness of the Social Link characters and eagerness to pursue a stronger bond. It’s a rare example of how quality writing and resonant themes can drive a game even while other elements are left wanting.

Earlier I mentioned how even Persona‘s weaker areas contribute to a cohesive whole: the primary area in question is Tartarus, the half-baked, towering dream-castle wherein the player reaches new heights in tedium. In a review, I might be more severe toward the whole, uninteresting slog. For the purpose of criticism, it’s an admittedly effective metaphor for life’s more discouraging moments. The amount of measured sadism and anti-commercial intuition required to produce a microcosm of life as entertainment is respectable. Sometimes life sucks. Through all of Tartarus’s hardships and drudgery, time never rests; if the player refuses to move on, stymied by indolence, a personification of Death drives him or her forward. As the underlying, subconscious presence that motivates our every aspiration in human life, Death’s appearance reminds players of their ephemeral existence even within the warped world of Tartarus. Likewise, each ascension in the castle is one step closer to the end.

Additionally, the game’s turn-based skirmishes, arguably its one concession toward convention, have been adapted to suit the theme of momento mori (“remember you must die”). Persona 3’s protagonist is a silent vessel: you fill in every detail save the My Chemical Romance haircut. With full responsibility over one’s self comes complete lack of control over others: just as you can’t hope to dictate how a friendship develops, you also can’t micromanage your party’s actions in battle (until Persona 4, that is). You are left in charge of your own life. In an even greater departure from traditional JRPG design, that life is unique. There are no Phoenix Downs to help you back on your feet. Once your avatar is downed, you are escorted out of the game with a quick reflection on mortality and retired to the title screen. If you don’t manage your resources throughout Tartarus and make the right calls in battle, you will die.

Then there’s the small bit where you continually place a gun to your head.

William Blake, an outspoken proponent of taking life by its balls and plucking the pubes of opportunity one by one, includes this sentiment among his invigorating Proverbs of Heaven and Hell: “The roaring of lions, the howling of wolves, the raging of the stormy sea, and the destructive sword, are portions of eternity too great for the eye of man.” Blake’s cosmic reflections are echoed in Persona 3 by Akinari Kamiki, a young man wrestling with fatal illness.

The meaning of my life is not something I should worry about. It’s really what others think of my life or what I was able to do for them. So… for me, or you, or anyone… the meaning of our lives is something that we make but don’t see.

It’s not maudlin. It’s not an outlying bit of philosophical nonsense. It is Persona 3’s thesis statement, an idea that summarizes every moment preceding and following it.

When you’ve made your final choice in Persona 3, you will find yourself resting in the arms of one of your closest companions. You say nothing, make no dramatic, closing gesture to punctuate your fading life. For a game that can be so frequently exhausting in its expository jabber, the last moments of Persona 3 are heavy with silence. The emotional response, the catharsis, to your fictional death is earned organically, bred internally, having culminated out of choices that brought frustration and determination, success and failure, heart-swell and heart-break. It’s an affecting example of ludonarrative harmony, a small slice of life, and you don’t need an open world, dialogue trees and the option of infanticide to achieve it.

That feeling you get when you wrap up 80 hours in a game about mortality? That’s irony.

EVERYTHING SHOULD BE FREE